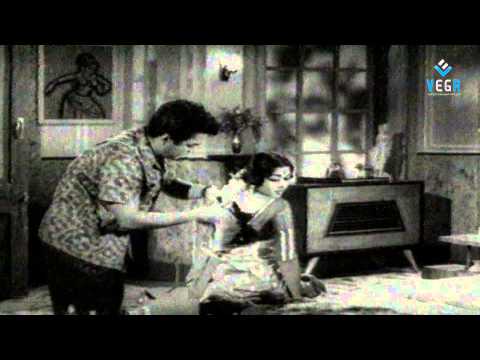 MGR as Anand plays a lawyer in this film. He with his doctor friend Gopal meet a girl (Saroja Devi as Neela) in Mahabalipuram and MGR falls in love with her. But he sees her jumping off a cliff and the doctor pronounces her dead. Heart broken, he travels with his friend to get over Neela, but sees a theatre performance of the famous song "Sange Muzhangu" starring Saroja Devi. He follows her backstage and confronts her where she calmly tells him that she is "MalliKa". Still unconvinced he peeks into her dressing room and confirms that she is indeed Neela, because of a scar in her back.Meanwhile Mallika asks her sister about the incidences in Mahabalipuram and is told that it is better that she does not know about it. Anand and his friend convince Mallika to marry Anand. Her brother-in-law (Nambiar) is against this and tries to thwart their plans, but they marry in spite of this.In order to trick Nambiar to come out with truth of what transpired in Mahabalipuram, Mallika pretends to get hysterical and runs up the Light house and jumps down. Her sister distraught, tells MGR that her husband (Nambiar) had killed a girl who looked exactly like Mallika and taking advantage of the similarity in their looks(!!!) her husband made every one believe it was a suicide. Saying this she swallows poison and takes her life. Nambiar who is watching all this tells MGR that both the witnesses to his murder are dead. The police who were hiding waiting for his confession swoop down and arrest him. It is revealed that it is actually a marionette dressed like mallika that was thrown from the light house and mallika is safe. She comes down crying for her sister. And then they live happily ever afterFor more full length tamil movies http://youtube.com/tamilmoviesFor more full length telugu movies http://youtube.com/tollywoodFor more full length malayalam movies http://youtube.com/malayalammoviesFor more full length kannada movies http://youtube.com/drrajvajreshwariWatch tamil and telugu video songs http://youtube.com/vegamusicofficial