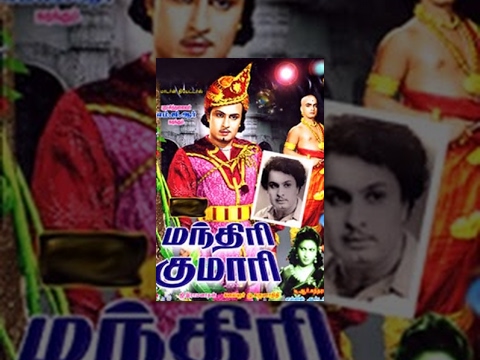 TO BUY THIS MOVIE IN DVD CLICK ON THE LINK BELOWFollow Us - http://www.rajvideovision.netContact Us - No.703,Anna Salai,Chennai-600002.Phone-044-28297564,044-28297175Movie :Manthiri KumariDirected by Ellis R. DunganProduced by T. R. Sundaram (Modern Theatres)Written by M. KarunanidhiStarring M. G. RamachandranM. N. NambiarS. A. NatarajanG. SakunthalaMusic by G. RamanathanCinematography K. G. VijayanEditing by L. BaluRelease date(s) 24 June 1950Language TamilThe king of Mullai nadu is dominated by his Raja guru (head priest) (M. N. Nambiar). The guru wants his son Parthiban (S. A. Natarajan) to be appointed as the General of the army. But the king appoints Veera Mohan (MGR) instead. The enraged Parthiban becomes a bandit and starts raiding the country side. He wants to marry the princess Jeevarekha (G. Shakuntala) who is in love with Veera Mohan. Parthiban sends a message to Jeevarekha to meet him secretly. The message is delivered by mistake to the minister's daughter Amudhavalli (Madhuri Devi) and she goes to meet Parthiban. Parthiban and Amudhavalli fall in love. Meanwhile, the king sends his general Veeramohan to capture the bandits plaguing the country side. Veeramohan captures Parthiban and produces him in the royal court. The Raja guru is enraged and tries to get his son off by various means. He demands a trial for his son in front of the Goddess. During the trial, Amudhavalli hides behind the Goddess statue and pronounces Parthiban as innocent. She blames Veeramohan for the banditry. The king believing that the Goddess had spoken releases Parthiban and exiles Veeramohan. Parthiban and Amudhavalli are happily married. But goaded by his father Parthiban wants to take over the kingdom by marrying the princess. He decides to kill Amudhavalli. He tricks her into going with him to a cliff edge and tells her of his intention to kill her. Amudavalli begs him for a chance to worship him by going around him three times before she meets her death. Parthiban grants her last wish. While going around him she pushes him to his death from behind. Shocked by her actions and her husband's betrayal, she confesses her sins and becomes a Buddhist nun. The raja guru is jailed and Veera mohan is reunited with the princess.