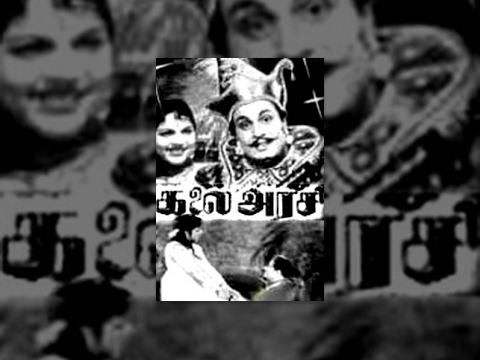 TO BUY THIS MOVIE IN DVD CLICK ON THE LINK BELOWFollow Us - http://www.rajvideovision.netContact Us- No.703,Anna Salai,Chennai-600002.Phone-044 -28297564,044-28297175 Movie :Kalai ArasiDirection : A. KasilingamWritter : T. E. GnanamoorthiStarring M. G. Ramachandran,P. Bhanumathi,Rajashri,P. S. Veerappa,M. N. NambiarMusic : K. V. MahadevanLyricist: Kannadasan,Aalangudi Somu Release date : 19 April 1963Language : TamilKalai Arasi' is a well-blended story of romance, science fiction, action and drama with the main cast of MGR and Bhanumathi essaying double roles.Mohan is a poor, but honest and hard-working farmer. Vani is the daughter of the rich landlord who lives in the city while their lands are under the supervision of her cousin and suitor, the wily Kannan. On a visit to the village with her friends, Vani meets Mohan. Mohan and Vani find themselves falling in love with each other gradually.Meanwhile a spacecraft is moving rapidly towards the earth. Inside are two alien creatures who resemble earthly humans. From their conversation we understand that they are traveling to the earth on a strange mission. Apparently their planet has made far-reaching strides in science, but is woefully backward in performing arts. Hence they are coming to the earth to identify and take back a talented artiste who could teach their denizens music and dance. As they near the earth, one of the aliens, Thinna, who is the commander-in-chief of their planet, switches on a monitor, and the screen shows music and dance performances in various parts of the earth. He seems to be dissatisfied with them all, until he comes across Vani singing. He is mesmerized with her performance and decides that she would best suit their purpose.Returning home after a clandestine moonlight rendezvous with Mohan, Vani falls into the clutches of the aliens. Thinna drags her inside the spacecraft, while the other alien Malla elects to stay on in the earth for a while. Vani is shocked when she finds herself far away from the earth. The king of the alien planet assures her that she will return safely after she had taught them dance and music. Vani is defiant and furious. However, princess Rajini treats her kindly and Vani agrees to teach her. Meanwhile back in the earth Vani's father blames Kannan for Vani's disappearance. Kannan goes in search of Vani and comes across a mentally deranged girl called Valli who bears a startling resemblance to Vani. Assuming that she is Vani, he gets her kidnapped and brings her home. Saddened to see his daughter a lunatic, Vani's father agrees for Kannan to get married to her, and thus Kannan marries the poor Valli, under the assumption that he is marrying the rich heiress Vani.Mohan spies the alien Malla one night as Malla is getting ready to return to his planet. They have a brief skirmish and Malla dies. Thinna lands in his spacecraft just then to take Malla home. He sees Malla's corpse and places it in an ante-chamber inside the craft. Watching all this, Mohan enters the craft quickly, and dragging Malla's corpse out, he jumps into the ante-chamber. Thinna does not notice this and takes off from the earth. When he nearing his planet, he ejects what he assumes to be Malla's corpse from his spacecraft, but it is actually Mohan who falls into the alien planet. By happenstance Mohan comes across a kind-hearted jester from another planet who is on the way to the palace. This jester takes Mohan to his house and feeds him. As they step outside, the jester is struck dead by a passing meteor. As luck would have it, the jester had resembled Mohan in facial features, and so Mohan takes his place and goes to the palace. There he meets Vani and manages to make her realize his true identity. They outwit the cunning Thinna and return to the earth. Meanwhile Kannan is caught strangling Valli and is arrested by the police. Mohan and Vani reach home. All is well that ends well.Sarodee having producer and distributor rights.